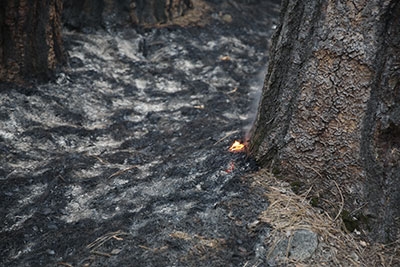 – Please tell me if there are any mistakes in this article, I will correct them as soon as I can. –

So I drove with eyes wide open in Yosemite Park on a beautiful fall day, an intense white mist settles. But a mist smelling smoke, it’s disturbing. The road is marked, it is forbidden to drive on the right lane and to park. A « watch for fire » panel is legible on the side of the road. A few meters later, hesitating to move forward wondering if all this was reasonable, I saw on the right a tree red embers. Intense smoke clears from the burning landscape. After a while – I would difficulty say how long, being in a state of wonder and of increased attention (if a pin had decided to fall on me) at the same time – the road marking stopped. Just before, a group of firefighters gathered.

Set fire to parks, in California, it is commonplace. 45 hectares of forest were burned intentionally this fall in Yosemite. The purpose? Not to scare tourists, but to use the fire as an ecosystem restoration system.

« Fire is a natural part of the Sierra Nevada Mountains, which includes Yosemite National Park, explain Gary Wuchner, Fire Education and Information Manager of the park. In fact fire has shaped the landscape of California for thousands of years. Human has first wanted to eradicate it, then they reused the fire as a natural cleaner in the 70s. » In the absence of forest fire, the density of the shade resistant species such as cedar or white fir, reached unnatural and unacceptable levels, a sign informs in the park. « Small species, such as bushes, have also developed, says the Manager. The problem is that their roots, smaller and less deep than the tall pines and oaks, drink all the water and large trees doesn’t have enough.  » Fire also helps to clean the forest of weak trees, deaths and natural debris.

« In places where lightning and natural fire is not considered ideal, by example near homes or other infrastructure, fire managers will utilize prescribed fire as tool that can be more easily managed, add Gary Wuchner. Prescribed fire are low intensity fires.  Reasons for prescribed fires include:  to enhance cultural landscapes, provide defensible space from un-wanted raging catastrophic wildfire and reduce overgrown forests with healthier sustainable forests. This last point is very important with climate change and threats to the park. »

The fire is not started without preconditions. « The air quality is important, so is the humidity », say the specialist. A permit is issued by Mariposa Country Air Pollution Control District – MCAPCD – to ensure that the air quality is sufficiently good, fire making a lot of smoke.

The action itself lasted one day, the vegetation took three to five days to burn. As the rain in this season, fire and smoke may possibly disturb the tourists, but they are essential to the health of nature.